All tickets will be sold the day of on the lower level near the Apple Store starting at 5:00pm. Tickets are $25 for an individual autograph from Talley & Bennnett, and $15 each for Christie. However, a Super Ticket can be purchased for $50 which includes an autograph from all three players. Presale tickets will not be sold. Call 716-681-3400 for details or stop into Sports Obsession on the upper level near Old Navy for more information.

These iconic stars provided memorable moments as part of the Buffalo Bills organization from the mid 80’s to the early 90’s Super Bowl team runs. Darryl Talley’s tenure with the Bills lasted 12 seasons (1983-1994), with 2 Pro Bowl selections and the recipient of the Ed Block Courage Award in 1990. Cornelius Bennett’s career with the Bills lasted 9 seasons (1987-1995) and was named to the Pro Bowl five-times including winning the AFC Defensive Player of the Year award twice in 1988 and 1991. Kicker, Steve Christie, played for Buffalo from 1992 to 2000. In 1993 Christie set a Bills franchise record by kicking a 59-yard field goal, just 4 yards shy of the all-time NFL record. He also played a key role in the Buffalo Bills historic comeback victory over the Houston Oilers, in which Buffalo erased a 32-point deficit to complete the largest comeback victory in NFL history. Christie kicked the game-winning 32-yard field goal in overtime. 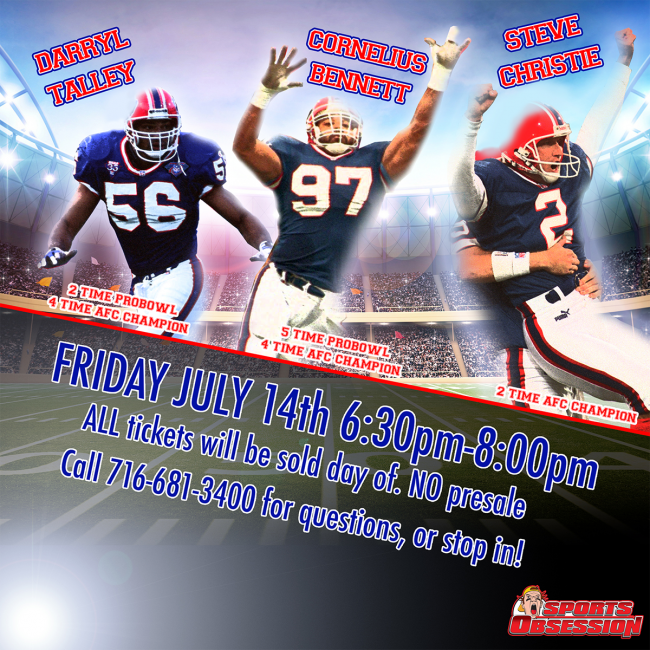