Playball Ink and Walden Galleria will be hosting former Buffalo Bills linebacker legends, Darryl Talley & Cornelius Bennett for a meet and greet with fans this Saturday, December 21st from 2:00 p.m. until 4:00p.m. The former players will be available to sign autographs on the lower level near Macy’s.Tickets will be available at Playball Ink on the upper level near Lord and Taylor and for sale at the event location for $30.00 per autograph or $50.00 for both. Playball Ink will have sports memorable available for purchase at their store location on the upper level near Lord & Taylor.

$30.00 per ticket for one autographed item per player

$50.00 for one autographed item from both players

These iconic stars provided memorable moments as part of the Bills organization from the mid 80’s to the early 90’s Super Bowl team runs. Darryl Talley’s tenure with the Bills lasted 12 seasons (1983-1994), with two Pro Bowl selections and the recipient of the Ed Block Courage Award in 1990. Cornelius Bennett played for the Bills from 1987 to 1995, retiring from the league in 2000. Bennett was a five-time Pro Bowler and won AFC Defensive Player of the Year twice in 1988 and 1991. 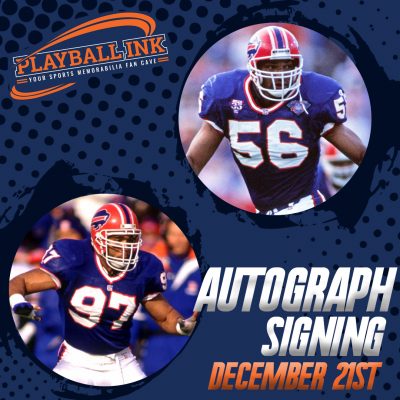